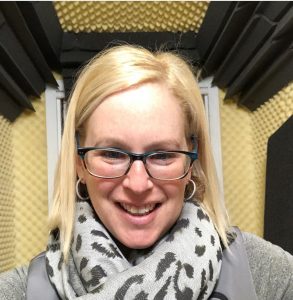 My kids will often say, “Mom, stop making that face!!!” or “Mom, will you make that other face?” Recently someone asked me if I make faces when I work, especially when I do character work. I don’t have a mirror in my recording studio, but as I make faces all the time, I am positive that I must!

The only professional who ever commented on my faces is Dave Walsh. While what happens in a Dave Walsh coaching session stays in a Dave Walsh coaching session, I think I am allowed to say that when I would scrunch up my face too much he was not pleased and we had to work on that!! The effects of the facials scrunch were coming through in my reads and it was something to work on. When I learned to relax my face, my read was better.

I do a lot of character work. Yes, even when I am doing a telephony or eLearning job I am assuming a character, but when I am actually playing a character like a mermaid in a mobile app or a candy princess in a video game, that is actual character work. When doing that type of acting, especially for toys, my entire body is used and it is really animated. If you don’t move all around and gesture and put physicality into it, then frankly it does not sound great.

I also think the reason I make a lot of faces is that is part of my personality and I cannot hide what I am thinking. That trait, which I think a lot of creatives have, helps very much in voiceover. This does not, however, make me a very good poker player.