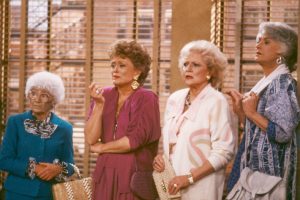 I admit that this may date me a bit, but as a little girl in the 80s’, one of my favorite parts of the week was watching the Golden Girls on Saturday nights with my sister. Sometimes we watched with our Mommom (that’s Philly speak for Grandma), but typically our parents were out to dinner and our time with Sophia, Blanche, Dorothy, and Rose was the highlight of our evening! When I reminisce about the time spent watching Golden Girls, it’s hard to separate the actors from the parts that they played as we both identified with these characters and adored them.

Now, as a professional voiceover talent, I not only remember the show with nostalgia, but I am inspired by the work as these actresses set the bar high in terms of talent. First, as characters, the savvy and quick-witted women of Miami serve as archetypes of characters. As a character voiceover actress, thinking about what each of these women and their lives represent on a higher level is as meaningful now as it was to me as a child. While I learned so much about life, love, and romance from them then, now I also appreciate what they represent in a new light. For example, Dorothy has dead-pan, stoic sense of humor, strength, and wisdom. But, at the same, time she can also be a martyr and a know-it-all. The way Bea Arthur used her timing and in a single glance could say a thousand words- it was pure brilliance.

As a voiceover talent, it isn’t just their comedic timing that I appreciate, and I really think these actresses nailed it every time, but I also love the word emphasis. Rose’s character is particularly charming. I love the way Betty White delivered the “foreign” words from St. Olaf, Minnesota. She does so with such charm and panache is if they just role off the tongue, and as someone who speaks for a living I can assure you that vertunkenflunken does not just roll off the tongue. As a character actress, I think it isn’t just Rose’s delightful sweet side, her innocent kindness, or her determination to help other’s that I admire in terms of how the character was written, but I think that I really connected with Betty White’s delivery because dialects are so difficult to master and her pacing and word emphasis was always flawless. The result was a lovable and endearing character.

Female Characters that Set the Bar So High!

Understanding the subtext seems to be part of the essence of what these actresses do best. When Sophia starts a sentence with “Picture it, Sicily….” it isn’t just that we know what’s coming, it’s that we know that something so much bigger than what she is really saying is coming. As a professional voiceover talent, understanding subtext is a part of every single read, and the craft of delivering it without the audience even noticing is a brilliant gift that happens throughout each episode of Golden Girls.

Another reason that these actresses give the rest of us so much to live up to is the emotional depth that they build within each character. Perhaps we feel this because Rose, Blanche, Dorothy, and Sophia do not just exist as individuals, but they have a group identity that we relate to as well. In my life I have had the priviledge not just of having my sister who I am exceptionally close with and speak to constantly every day and share everything with, but I am also blessed to have very close girl friends. My girl friends are amazing, smart women and on my best days and on my worst days I am so thankful that they are there. In Golden Girls, we see this aspect too. What would Blanche be without Dorothy in her life? Sophia doesn’t just need Dorothy, but she needs Rose and Blanche too. The symbiotic relationship that exists is quite special but is also quite realistic. The actresses who built these characters had so much chemistry.

What’s the takeaway for voiceover?

So how do I bring all of the richness that these brilliant actresses spent years developing in their multi-faceted characters and take that into something that can help me with me and my work?

There are some things you can never get enough of, chocolate for one, and a great program like the Golden Girls!