They Day We Met 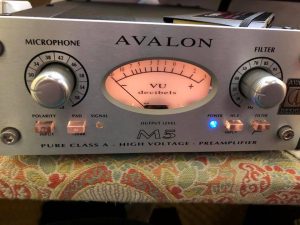 It all began last June 2017, one scorching hot day in Las Vegas. I stepped off a flight from San Diego, it was over 120 degrees in Vegas, and before going to the WOVO conference (professional organization of voiceover talent), I had to go record three commercials that I had booked at Adrenaline Studios. I have never spent much time off the strip and despite the oppressive heat I was really excited to see some more of Las Vegas.

I was extremely thankful that Dustin Ebaugh and Dave Courvoissier had made arrangements for WoVo members to record at Adrenaline. Since I had just been at an eLearning Guild conference in San Diego, and I knew I had access to a professional studio in Vegas, I had decided to leave my travel rig at home. When I got there I was greeted by the engineer I was going to work with, Brandon Perry. I also immediately saw other WoVo folks who had had bookings, including Liz DeNesnera and Brad Venable. I was delighted to be a part of the professional community. Brandon took me to the studio to get started. And there, there is where it happened.

First I noticed the Neumann mic. It was not the TLM 103 that I have at home, but they assured me I would sound great and my clients would be happy. Then I saw the Avalon 737. I asked Brandon about it and he showed me how it worked. I asked him if he thought I could handle this preamp on my own and he said absolutely. If you are not familiar with this equipment, your mic goes into the preamp and your preamp goes into an interface which converts the analog signal to a digital one that your computer can read, and then the interface plugs into your computer. The Avalon is a high voltage preamp and it has a very sensitive gain and an amazing filter.

In that moment I set my sites on the Avalon. I had not read anything about it yet, but I knew I was going to begin saving for one. That night I started researching the Avalon and I was pleased to learn that the M5, a smaller version of the one I had seen, existed and would suit my needs perfectly.

So, Why Does Our Equipment Matter?

You might be thinking, is this more than just a pretty box? There are lots of preamps, what’s the big deal. Well, a LOT goes into a successful voiceover career. There are plenty of talented folks and a lot of people with lovely voices. Our job is about so much more than the voice. We must have good technique and constantly be working on our craft. But more than that, we are only as god as we sound and that is entirely dependent on our studio quality!

A lot goes in to setting up a studio. I worked with two different engineers to set up mine. I worked with “Uncle” Roy Yokelson from Antland Productions and George Whittam, and then as I can afford to I have made substantial upgrades so that my equipment is what is expected for network jobs. Put simply, you will never book the high end campaigns if you do not have the good equipment behind you. On a philosophical level, you are not willing to invest in yourself and your studio, the folks who cast you will not have confidence that you are the right choice for their projects.

Next, the more your learn about gear as you advance in your career, you simply cannot bear the thought of not owning it and working with it. Our ears are trained to hear the nuances in our voice and our work. Once we hear it one way, we want to be able to provide that to our clients every single day. It isn’t as simple as saying that there is one right microphone or one right pre-amp, but it is as simple as saying that once you learn to do something better you want to do it that way from that moment on.

The Joy of the M5

The day that my Avalon M5 finally came home, I must admit I was both excited and nervous about hooking it up. My first delight was that I could actually assemble the equipment without incident. Immediately I was pleased with the sound! I had two big eLearning projects and was so excited that I could test it out on those jobs.

I also posted with glee on Facebook. To my surprise, so many highly esteemed voiceover talents posted about how much they love their Avalon M5s! Randy Thomas remarked about how great she sounds on it. Jack Daniel talked about how happy his big network clients are with his Avalon sound. Carson Beck and Tim Tippets engaged in a long thread about the signal chain and the sound. Christian Lanz shared a photo and apparently owns two so that he even has one with him when he is on the road! I have to say, I completely understand why and the only thing better than having one Avalon M5, would be for me to do well enough to have a place at the Jersey shore to put the next one in! A girl can dream….