Times sure are a changin’. When we were kids, we didn’t have a tv in our bedrooms. My parents loved watching tv with us and felt strongly that it was a family activity so the tv was in the family room. We also had a “little tv” as we called it in the kitchen. As it ran on an antennae and only had the main networks, if we were sick or they were out on a Saturday night, we had the special treat of having the little tv moved to our room! But, my sister and I were expected to enjoy it together. I remember watching Saturday morning cartoons in bed with Julie on occasion, and loving the lineup including “the Smurfs,” “The Snorks,” and “The Gummy Bears.” Those were special times.

Now it doesn’t matter so much that my husband (who grew up without a tv, gasp!) and I don’t have tv’s in our twins’ rooms, because they are amongst the 1.3 BILLION people who, according to Merchdope, are partaking in the watching of 5 BILLION videos every day! 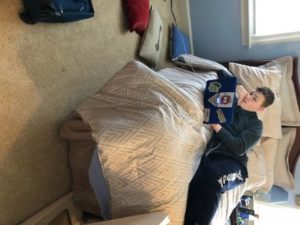 Typical of their generation, my twins have laptops, iphones, and ipads and can use any and all of these devices to watch YouTube.

And what is popping up on every, single video they watch? I am sure that you have seen those 6 second ads, that used to be 3 seconds, that you can’t skip. Those are called YouTube Bumper Ads and they are changing the landscape of voiceover. As a professional voiceover actor, I know have the exciting task of telling a story, showing emotional range, communication the essence of a brand, drawing in a customer, and connecting with the audience all in six seconds! I think folks who pursue a career in voiceover enjoy a challenge, and this new genre is just the next arena for us to dazzle our clients with our voiceover skill set. The YouTube Bumper presents all sorts of opportunities in marketing.

How big is this trend?

The trend of the YouTube Bumper Ad in voiceover is here to stay. Like in other commercial realms, marketing and ad executives strive to create a custom audience and based on the YouTube search can target a specific subset of viewers. Unlike commercials in other genres like television and radio, YouTube bumper are not skippable. With over 1 billion users daily, the permutations of groups and subsets of viewers to build brand awareness offers such vast potential with numbers never seen before all in one place! For example of what major brands are doing, Jon Lafayett of Broadcasting Cable explains “Busch used bumpers after a campaign that included the Super Bowl and saw double-digit lifts in both purchase consideration and brand awareness among viewers. The bumpers were made from extra footage shot while making the Super Bowl spot.” This echoes my experience as the professional voiceover talent. After being cast for the tv commercial, the new media usage was added on to my voiceover casting so that the producer could record all of the voiceover in one session. This allows for continuity in the marketing campaign and further brand awareness when the clients relate the voice across genres. The fact that the numbers were so impressive for Busch indicates the success of such strategies and the YouTube bumper is integral to a solid marketing strategy today in an economy that is shifting rapidly.

In terms of voiceover technique for the YouTube bumper, adjusting to this shorter segment, while surprising at first, comes naturally for those of us who book a lot of commercial work. As my bread and butter has been voiceovers for tv and radio commercials since I started my career, when these scripts are written well it is easy to pour your heart into them. Most voiceover actors have done short spots on demos or tags. A YouTube bumper, however, is very different than a tag. Aside from the length ( and a tag on a commercial can be even shorter than a bumper), a tag is offering either an ending plug for the brand or a last bit of information. In a YouTube bumper ad, a voiceover actor has to be compelling and have charisma in a flash. Supposedly peoples’ attention spans are becoming shorter and shorter because of the time we spend on electronics, so they are looking for these short engagements and it is our job as the voiceover talent to make that connection.

Predictions About Impact on Industry

I believe that the YouTube bumper ads are here to stay and as the viewership on YouTube increases exponentially so will the need for professional voiceover actors to voice these spots. I also believe that the industry will continue to produce the 15, 30, and 60 second traditional advertising commercials as well. As long as radio and television continue to exist and have relevance in society, brands will want a presence there and will need for a connection in their YouTube and traditional marketing campaign. And at the end of the day, any working mom can tell you, a lot can happen in 6 seconds!!