Yesterday we had Randy Thomas in our Clubhouse room “Ask the VO Coaches.” If you have ever been in our Clubhouse, then you know that the vibe of the chat was different with Randy. Everyone was extremely excited to have her there. Randy has a body of work like no one else in voice over. She books across genres including Radio Imaging, Promo, and Live Announce and the list goes on. From the Oscars to the Tony’s to GMA, everyone has heard Randy. Despite her celebrity, Randy remains kind and humble. Always dedicated to helping those around her in voice over, Randy spent an hour with us!

How Randy Segued From Radio To VO

Randy worked in radio for many years. Starting as a teen at a station in Detroit, she loved it. As a DJ, she went from MI to NY to Dallas to Miami. Randy said she thought radio was everything and she’d do it forever. While she was at the Miami station, they gave her copy to read. That was when everything changed. Randy became the first female ever to announce for the Oscars.

Live Announce Vs Other Genres

Next, Diana Birdsall and I asked Randy how Live Announce reads are different. She said when she reads for the Oscars she reads it big, with confidence! It’s not about being loud, it’s about the tone and the vibe that you project. Over the years, Randy says she has mellowed. We asked Randy how different shows get different reads. Her instincts come into play a lot. For example, the Tony’s are way more compact. When in the Director’s Guild Awards she feels like she is in “rarified air” and gives a special, hipper read. 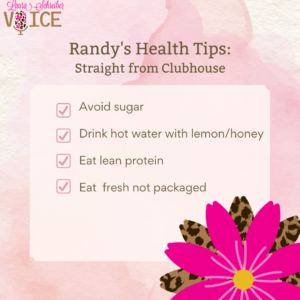 Like with other genres of voice over, actors have to make a choice. Directors give input and Randy works with that. Randy shared an anecdote about her late, great friend Chris Corley. Chris is well-known for being the voice of the MLB network, movie trailers, imaging, and more. Anyway, once auditioned. He was cast in this role. Once hired, they told him his read was not what they wanted. But, he was so committed and they loved that commitment to the read. The choices we make when we read and the characters we choose matter so much across genres.
Another interesting aspect to Live Announce is the scarcity. So, no matter how talented a voice over artist is in this genre, there are simply not enough gigs. This is why brancing out into other genres becomes necessary.

Being the First Woman to Announce the Nightly News

I confess I was beyond excited to talk to Randy about this. Only Randy not only has such a good opportunity, but her opportunities have been unique. As the first woman announcer for Prime Time, Randy broke this glass ceiling. We asked her why it took so long? Randy said men were making decisions. They went with what they new. When she got the opportunity to host the Oscars, she did not think about being first, she was thrilled. Randy’s work as the voice of news shows like GMA and Prime Time is important. She is changing perceptions about women and where we fit in the workforce.

Having Top Agency Representation and Its Implications

Atlas Talent represents Randy and all her bookings go through Atlas. Randy shares that 95% of her work comes from Atlas, and she has a few relationships of her own. We asked Randy about the impact of top representation. Having always coveted it myself, I was curious for her perspective. Randy shared she thought it is possible to still go after certain genres without such an agent. In my experience, having various regional agents I am very thankful for, there are limits. Promos, TV Affiliate, and Radio Imaging seem to be under the lock and key of the top tier agencies. As some one with lots of agents, that work just does not come my way and I sure wish it did.
Randy also talked about being a union talent. She talked about how much being part of the union means to her. The union scale jobs have been great for her career.

Finally, we had big announcements! VO Master is coming back in 2022! Randy shared they are back in force this year. Rachel Wohel, Randy’s daughter and fellow VO actor, Joined us. They divulged several upcoming events.
First, they present “Marketing to Local Businesses to Become ‘The voice of your town’” with Tom Aglio. That’s this Saturday, Feb 19th from 9:30-11:30 am PST.
Next, they offer “The Anatomy of a News Promo: Work With ABC News Producer Yoni Mintz” on March 7th from 5-7 PM PST.
Lastly, for the first time ever, they are doing casting on Clubhouse! They will be casting for a dystopian poem, “Drums of Grace” by Michael Rothenberg. Randy and Dennis Kleinman have already co-narrated it. This will be a condensed version written by Cherise Alexander. They will be casting for this live reading soon, so don’t miss your opportunity!