If you know me at all or follow me on social media, then you probably already know that my father recently had a 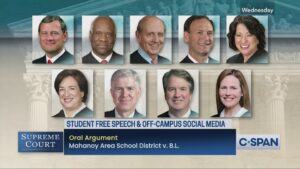 landmark case in the US Supreme Court: Mahanoy Area Schools Vs. B. L. In the case, as in all of his work, my dad represented the school district. My father has been a school law layer in the state of Pennsylvania since 1975, so whatever the issue, my dad is always counsel to the school, never to those suing the school. While over the years some of my dad’s cases have gotten publicity, like the Grade Gate scandal in Harrisburg sometime in the 1990s, and his more recent transgendered bathroom case where he won in the third circuit, protecting the rights of the LGBTQ community. This case, though, got international publicity. The fascinating thing was that the decisions was so complex that when it came out, I myself thought that my father lost. Instead, my father and his team of expert attorney’s were elated. Why? Put simply, the headlines were misleading, many in the media understood the issues being appealed, and the headlines that seemed clear did not paint an accurate picture of the implications of the ruling.

So, how on earth does this relate to my professional voice over career? Well, recently, towards the end of a video demo production process, my demo client began to panic. After reading on social media about usage issues, he became concerned that using the content we were using was not permissible. Even though we spent a lot of time going over this early on, he had terrible anxiety. Why? The headlines were so misleading. The problem with jumping to conclusions is that it takes you away from the actual data and research, and down a rabbit hole of mis-information. So, as a voice talent, how do you sort out the “fake news” and build a solid foundation for your voice over business?

Building a Career Comes from Research

I spent months doing research before I ever started working with my first coach. I do research every single day. Just like in all academic realms, you have to be able to evaluate your sources. In addition to the numerous books on voice over written by long-time coaches, there are countless blogs just like this one written by voice actors who have been in the industry for years. Now, you can also go to places like VOBS, YouTube, PodCasts, and Clubhouse to hear about voiceover directly from industry experts. This was not the case when I was starting out, and that level of accessibility is fantastic.

Time in the Industry

Know What Questions to Ask

Perhaps instead of using social media to get thrown off course and begin to panic or at the very least become confused, perhaps use it to ask the right questions. Have a running list of questions for the next Clubhouse or session with your voice over coach is much more productive than going down that rabbit hole.

Don’t Be Swayed by Posts

So when I start working with a voice over student, we talk about all of the usage issues related to content in demos. My demo partners and I use content from libraries that we pay to belong to, so that our video demo clients are protected. There is a reason that when you go to the pages of DPN or Atlas Talent their talents’ demos refer to real brands and not fictitious brands. This is standard in our industry. So, when you go on social media and there is a group of newbies who have been in voice over for five minutes, use their concerns to ask questions, or to share what you have learned. Once you know better, you can help lead the voice over chatter in a better, more productive direction. And remember, if I could be so confused by my own father’s legislative triumph at the highest level, it is entirely possible that folks new to the industry talking in circles could be very confused by a bunch of well-intentioned but very mis-lead postings as well.