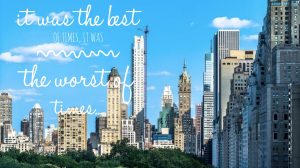 The Potential for Life Changing Awesomeness

You have to understand that I am a huge optimist. I always think everything will be great and that every single thing I do has the potential to not just succeed but to be life changing. I mean, it’s worked out pretty well, right? I have two ivy league diplomas, married the man of my dreams, I have pretty fantastic kids, and the cutest dog on the planet, so this attitude of hope and optimism has worked out thus far. How could it not? If you’re super smart and you work hard and you try your best what could possibly go wrong?? You see where this is headed….

So like many voice over actors I am in tons of facebook groups. Honestly I can’t even count them all but I really enjoy them both for the useful information and the meaningful social interaction. One night, I think in the Actors in NYC group or something to that effect, someone mentioned the Actors’ Connection. I was excited to see the variety of programs they offered and was super excited to see one that had big agents from top agencies coming to the program. My perception, or rather mis-perception, of the event that I rather enthusiastically signed up for was that it was like speed dating with agents. They were there. We were there. We would schmooze.

My hope was to chat it up. I just got new business cards so I gathered a ton of those. I also printed a list of my top 10 clients of all time followed by my top 5 clients of the month, both of which I am rather proud of. We had to send in our head shots and resume in advance and I was really proud of that as well. I felt prepared and hopeful on the big night.

The working mom in me planned ahead on the home front too. I had my mom coming to give the twins dinner and my mother-in-law was coming to do Latin homework with Jack, so I had all the bases covered. I was prepared for greatness. All I had to do was show up, right?

The Great Debacle: A Fantastic Event For Which I was not Prepared

Did I mention in addition to being an optimist that I am also very type A? I have read for top agents in LA before. Both times I was extremely well prepared and I thought I nailed it. I got very positive feedback and left feeling like a did my best. Was I signed? No. Did my life change in any way from those events other than feeling relieved that I did not f—- up? No. But the key thing is that I showed up prepared.

So last Thursday I also thought I showed up prepared. The thing is, the Actors’ Connection sends A LOT of emails. I do not mean this as a criticism. But I happen to have had a lot of bookings last week, and as a full-time working mom, I do not always read all of my emails. Well, I realized pretty quickly that this was a huge problem. This was NOT speed dating with agents. Not at all. I showed up prepared for an event that was not happening and was totally unprepared for the actual event. You have to understand that I am never, ever unprepared and I was having a silent stroke in my seat.

Every one else had scripts prepared as we were going to read for the agents. Which makes sense, after all, because why would they care just to chat with us? I did not have a script in hand. I pulled one up on my phone but I did this as the agents were speaking

and of course I was in the front row so I was not at all subtle. I felt like an ass. I found a script for a Culligan Water spot I booked months ago and I thought it was cute and showed my range.

As if I had never read live before, and in part because I did not have a paper script and was reading from my tiny phone which I never ever would have done, I began my first read. I raced through. Everything I have been trained to do went out the window. I will not recount all the ways in which I sucked, but let’s say that any charm, finesse, and charisma that my actual audition may have had to book the read was entirely missing on Thursday night. I was both petrified and horrified at once.

On the director’s cue I came out from the booth and got feedback from the agents before the second take. The agent from CESD spoke for the group. I held it together and went back in. The second take was not beyond horrible and at least I was not ashamed to make eye contact when I left. Before I departed the building, I was giving “report cards” with scores and comments from each agent. They showed a range of opinions and feedback from good to excellent and I took everything in me not to cry from the stress of it all. Oh how I longed to be in the security of my own booth!

I walked in the pouring rain back to Penn Station. I felt both crushed and defeated. I left my children on a school night to go into the city and instead of doing something to benefit my family I crashed and burned in front of an audience of folks I wished I had dazzled and charmed.

What did I learn from all of this? First, I need to read ALL of my emails! Next, even though it felt like disaster to me, the comments were actually somewhat encouraging and they were all pleased with my second read, so I suppose I was able to show flexibility and resilience even though I did not enjoy it. Lastly, even if I had been signed by any of those agents, which I would have loved, it likely would have opened more doors but would not have lead to some sort of instant and dramatic change in the trajectory if my life or career.

So what now? I just get up every day and keep plugging. I have a lot of auditions this morning and a live session for radio commercial at 1:30 so I just keep doing my thing. I am thankful that I get to work full-time in the field I am passionate about.