Why Switch from Avalon M5?

When everything is working perfectly in your booth, your bookings are solid, and you are happy with your sound, why shake things up with a gear upgrade? Well, life is not always so cut and dry in the voice over world. While I was really proud when I upgraded to the Avalon M5 preamp, and loved the way it sounds with my Neumann TLM 103 microphone, it is not portable. I’m at a point in my career where if I travel, which happens when there is not a pandemic, I need to sound the way I sound in my booth when in my travel rig. With an Avalon preamp and a Neumann mic, I sound pretty awesome. Even with a VOMO, it is hard to emulate that sound without bringing the Avalon, and if you have ever been in the presence of an Avalon then you know it is not portable. Thus, my journey began. 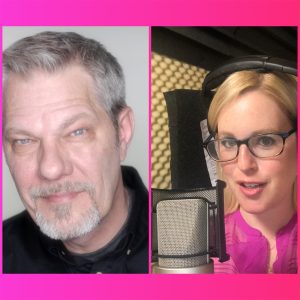 One of my VO besties, and all around favorite people on the planet, the amazing Kim Handysides, suggested that I work with the VO Tech Guru Tim Tippets. Kim said Tim does amazing stacks and would set up my travel rig. Initially I had not planned to change my in studio set up with the Avalon M5, just the rig. I reached out to Tim. Tim is amazing because he could just set you up and give you the answer, but instead he spends the time to educate you so that you understand the rationale behind his suggestions and why he is guiding you down a certain path.

The Journey- and Boy Was It One

To Start, I was limited because I was working on a 2015 MacBook Air. Even though my MacBook Air is running really well (knock wood), it only has one Thunderbolt 2 connection and the rest are USB ports. This posed some logistical challenges in terms of suggestions Tim wanted to make. Further, at the time, I was set up to mirror in studio on a monitor. So my MacBook Air stays in an office space outside the studio and I have a great monitor in my booth.

Tim suggested I part ways with my M5, as much as I have loved it, and move on to the Apollo Twin MKII Thunderbolt. He explained the advantages of the Apollo were amazing and that I would sound the same if not better in both my home studio AND I could use it in my travel rig. So, I made the switch.

Tim set up an amazing stack for me on the Apollo and my booth in the house is up and running, almost.

Problem Solving and the Challenges

While I am delighted with the sound of the Apollo and immediately booked a pretty big job in the first round of auditions after being up and running, the big hiccup is that I cannot hookup my monitor in the studio and now my MacBook Air is in the booth, very temporarily. Before an onslaught of well-intentioned notes comes my way, I have purchased and returned multiple adaptors to try to hook up an HDMI to a USB, but to no avail, none will convert a video signal readable by Catalina. And because my MacBookAir is from Early 2015, I do not have a Thunderbolt C port and cannot use an adaptor because my computer could not process the speed. So… I am upgrading and an iMac desktop is on the way! This MacBook Air will be used for my travel rig and for marketing and correspondence, which is fine and I am thrilled with the solution. 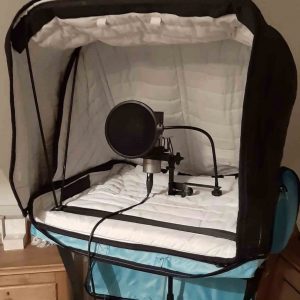 And the great thing about working with Tim is that he set up the presets in the Apollo for this as well. Now when I go away, I can plug this in and go!

When I first started working with Tim to set up the Apollo, the process was not seamless, not because of Tim- sometimes life is just like that. It seemed that everything that could go wrong did go wrong. Tim was a patient as can be as he has seen it all, but I felt terrible and was quite frustrated. In the middle of attempting to set up the Apollo, I had to do a long overdue Time Machine backup and then upgrade to Catalina, so had I done those things prior to our chat that would have helped. The last thing was that my MacBook Air was not recognizing the device after all of that. I watched multiple youtube videos as I could not bare the thought of texting Tim and telling him something else was wrong. One video made me wonder if something was wrong with my thunderbolt cable. When I looked at it, I realized the lighting bolt was only on one side. If you have an old model and your are using this kind of cable, even though you can plug it in with either side up, make sure that the end with the lighting bolt is face up. Once I did that, everything worked like magic and Tim could do his thing, but it took about 8 hours in my booth to figure that out!