When I started my business years ago I had so much to learn abut every single aspect of voice over. In addition to all of my vocal coaches for each genre of voiceover, and hiring a contractor to build my custom booth, I need serious advice about which computer to use and why I should make those choices. To understand how I came to a laptop, I also need to explain how I became a Mac user after a lifetime on PCs.

I had actually started my business with a Dell Laptop. My cousin David who is an audio engineer in Philly had advised me that the software I needed to edit my work would not run sufficiently on that computer. David described a scenario where I was working and everything crashed. I assumed David was speaking in hyperbole just because he, like so many younger people I know, prefer Macs. One humiliating day early on, I had paid a fortune to work with a coach in Los Angeles and everything that David predicted come to fruition! My computer crashed. I could not sign in to ipDTL. I could not get Audacity or Adobe audition to work. Nothing worked. I was in a total crash. I had a session and I was mortified and I was ready to work and knew at that moment that I needed to make a major change.

It was time to consult an expert. I had already been working with a local sound engineer known affectionately by industry insiders as “Uncle” Roy, aka Roy Yokelson of Antland Productions. Uncle Roy is a PC guy and he was teaching me how to do the sound editing I would need when I launched my business. Switching to a Mac meant I would no longer be able to solely rely on Uncle Roy for tech support. I was told to consult with George Whittam and that he would guide me in the right direction on what my next step would be. I scheduled a call with George right away. Even though this was years ago it feels like yesterday and I am still profoundly thankful for his help and support, which is costly but well-worth every penny.

I had a list of questions for George. If I was making the leap from PC to Mac, did I want a MacBook Air, MacBook Pro, or Desk Top? George encouraged me to get a souped up MacBook Air for my needs. Again, this is personal and it depends on your needs. For me, I needed a computer that would support all the audio software, have a large memory, and would be quiet. George explained that with enough RAM, the MacBook Air would meet my needs swimmingly. I also bought a hard drive to back it up so that if I had an unfortunate incident I would be covered!

George did not just make suggestions about the MacBook Air. He also guided me about other specs for the booth I was building to make sure that my audio would be pristine. As my goal was to get WoVo approval, which I did, this was also immensely helpful.

I am ultimately very pleased with my purchase of the MacBook Air. I have been using it for almost five years now. I travel for work several times a year and it is light and not bulky. It works well as part of my travel rig set up too.

There is another element to my specific business needs. I am a working mom. I often have to leave my studio in the late afternoon and drive my twins to after school activities or sports events. The MacBook Air is extremely portable and great for the mom-on-the go. I bought a Tumi work bag on The Real Real that matches my suit case and I feel very organized when I travel. I am really thankful that I did not purchase the slightly heavier MacBook Pro, which my son has, because I have back and neck issues and for me every pound makes a difference. 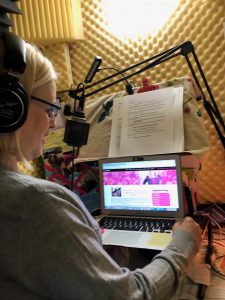 As with so many other changes I have faced in life, the anticipation of the change is worse than the change itself! I am thankful every day for the guidance that I got from my cousin and from George that pushed me in the right direction. I am thankful that the fan on my computer is so quiet. I am thankful that there is an apple store at my mall so I could get started so easily. I also LOVE using Twisted Wave. For me, the shift from Audacity and Audition to Twisted Wave was a huge productivity improvement. It is both my hope and intention that through conferences I will continue my tech education and will stay current with all of the new tech trends in voiceover so that I can best serve my clients.