I Saw It in The Sound Wave First 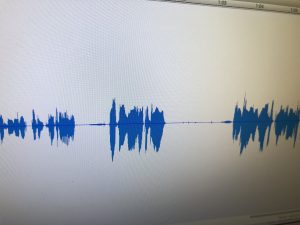 Late Friday afternoon I was in my booth recoding a bunch of agent auditions that had come in. Initially I felt fine. I had completed all of my booked work and I wanted to submit a few more reads before I called it a day. I typically don’t have a lot of mouth clicks when I record. I do run Izotope RX7 as part of my effects stack, which takes care of whatever clicks there are, but I tend to stay hydrated and am not so clicky, especially since I gave up caffeine. I noticed that even though my noise floor was the same as it always is, I had a crazy amount of spikes and clicks present that I do not typically see. This was 3 to 5 minutes before I became violently ill and had to run from the booth, I could see what I had no idea was about the be a horrible case of food poisoning, in my audio!

Within minutes, I had gut wrenching pain, could not stand, and was horrible nauseous. I almost fell over my puppy Daisy trying to run from my studio. It was brutal. I did make it upstairs in time, but had gone from functioning and working to completely ill and a total mess in moments. It was terrible.

The food poisoning came on in the middle of a nutrition challenge I have been doing. After all, in the midst of a global pandemic, what could be more important that putting my health first? And as a working mom, staying healthy and cooking good food, and presenting an over-all healthy lifestyle for my family, is always a priority. I also find that there is a direct correlation between my food choices and the way that I sound, so this nutrition challenge was right up my alley.

Since I typically try to eat well, why was this challenge unique? Well, I had been eating a lot more raw vegetables than usual and avoiding any processed carbohydrates. I still eat carbohydrates like sweet potatoes and squash, I just have been avoiding gluten free breads, cereals, and pastas. I had also been eating A LOT of salad. When a say a lot, I mean consider a normal amount, and then for me, the past two weeks had been more than double the amount of salad eating I ever do. It had been an insane amount.

In the midst of a nationwide romaine recall in 19 states, I believe that I got profoundly ill either from romaine lettuce or from an autumn lettuce blend, the latter more likely being the culprit. Whatever the cause, after epic vomiting, I was left dizzy and with a fever that hovered around 100 for 48 hours and alternating between chills and sweats. 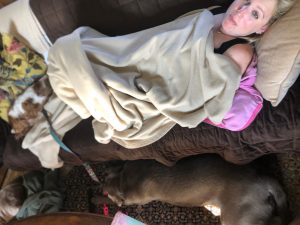 As a small business owner, I work all the time. Typically on the weekends I work less, but I still work at points every day. This food poisoning forced me to pause. I was not even sure on Saturday if I would be ok for my like sessions on Monday, but I know realize I will be. Talking is hard, sitting up is hard. Sometimes the forced rest is essential to get back to where we were. I guess it is an opportunity to reset- to restart. In truth I have no other option, when one is so dizzy that going up and down the stairs feels unsafe, the rest is the only option. In lieu of any work, I laid on the sofa in my den surrounded by my dogs and tried not o move at all.

As a voice over actor, our business is our baby and it is hard to set it aside for even a moment. When you have such a profound passion, even some intense vomiting does not dampen the passion. But the vomiting makes it virtually impossible to work and to work well. To act well, we have to meaningfully engage with our copy and easily switch from role to role, whether it’s the millennial commercial voice or an engaging professional in an eLearning narration. When you cannot sit up straight and you are burping a lot, it is pretty impossible to connect with the copy and be present in the moment as your stomach is really calling all the shots. Unless you have a great character gig as a burping child, this is really not the time to be in the booth.

The opportunities that arise here are ones for communications. If any work needs to be rescheduled, it should be done right away. I was fortunate, if ever there was a time to get sick, Friday afternoon was a good one. I had time to recover. I did not miss any booked work, I did not need to move any sessions, I did not need to notify anyone of my convalesced state. Believe me, I have had to do all of those things in the past, and you feel terrible to let a client down, so being able to work is a good feeling. I was lucky that considering how sick I got, it happened over the weekend and I will be ok.