If you’re in voice over, and you’re on Facebook, then you know how many groups there are for voice actors. There are so many. Why do I think voice actors spend time posting, commenting, and chatting on Facebook? Well, when you work alone in a padded foam booth, it’s really nice to have people. There is a really amazing, close knit voiceover industry, and even during covid, we all stayed close by continuing to chat on places like Facebook. In the past two weeks, I had to Facebook anniversary reminders of

friendiversaries with close friends. Seeing these video reels flash in my feed brought me profound joy. It reminded me of how much I have built. If you have the privilege of working in voiceover, and you are successful, you know that it takes a lot more that years of long days of hard work. Success in voice over also takes the support of awesome industry friends who are there to support you on good days and bad.

How It Started… I’m not really sure 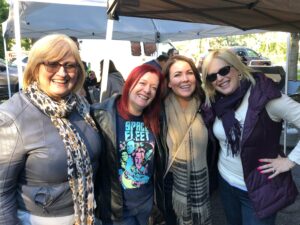 If I had to go back to the very beginning, and try to unravel this thread, I’m not really sure how my multitude of VO friendships and connections started. It may have begun with Anne Ganguzza and VO Peeps. I certainly “met” other voice talents that way. It may have begun with taking zoom classes through GVAA and keeping in touch with my classmates. It may also have begun with attending Uncle Roy’s famous BBQ. As a newbie, all of these made me feel part of a community and helped me see where I fit in. When you are just starting out, it is sometimes hard to push yourself to go. You might worry that no one will talk to you. It is so, so important to go and meet people face to face.  I can tell you that as you continue to work, sometimes you are tired and you have family “stuff.” One year we were dealing with some hard medical issues and I skipped Uncle Roy’s BBQ. I still regret not going. Who knew a pandemic was coming our way. Just show up. Participate. Be yourself and make voiceover friends. Everything will be better because you did. 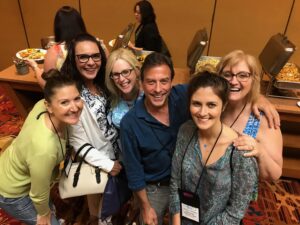 Conferences are an AMAZING place to bond. It literally does not matter which conference you pick, they are incredible. Yes, there is lots of learning and sharing of knowledge. But, in truth, as we all learned from doing everything remotely this year, the educational aspect alone is not what gets us to leave our families and hope on a plane. It is for sure the social aspect of the conferences that is worth more than gold. It feeds your soul and builds you up. The interactions are genuine and you will make friendships that endure. The women that I speak to daily I “knew” before I met them in person, but seeing them at WoVo Con and seeing them at VO Atlanta was our time to connect and really get to know each other. We lift each other up in every way possible.

Clubhouse is an amazing opportunity to connect with fellow voice actors and support each other. For example, every 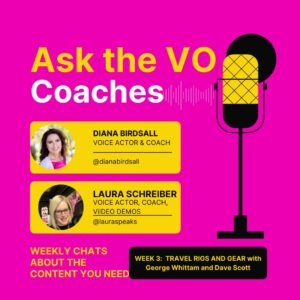 week I co-host a panel with one of my VO besties and fellow VO Coach Diana Birdsall. Our club is called “Ask the VO Coaches” and recent panelists have including Dave Scott from All Systems Go AV, Randy Thomas, George-the-Tech Whittam, Dan Leonard, Shelley Avellino, Bev Standing and more! Lot’s of voice actors come into the room and we chat about topics that matter to us. Clubhouse has given us a space to support each other and have an active and on going dialogue that raises the level of performance of the industry.

The Day to Day

Put Simply, on a day to day basis you need people who get what it means to be a working creative who has to juggle a lot of balls. You need people who regularly walk in your shoes in your life. You need friends who have your back not just because they are your friends, but also because they know what industry standard rates are, they know what it’s like to have a good live session or a brutal one, they know when the pickups just keep coming, or when none of your direct marking has gotten a result. On your best days and on your worst, you need other voice actors who will celebrate every single victory and get you over every tiny hump. Only other voice actors who have been to this rodeo get it. If you don’t have VO friends yet, get some.

Now More than Ever…

I think we can all agree that 2020 has presented us with some challenges. For those of us who enjoy the close knit voice over community, from the myriad of conferences each year to traditional events like Uncle Roy’s BBQ and Christmas Parties in NYC, when you work alone in a padded foam booth, interacting with others in voiceover is so much more than a chance to network. Any of us who go to these events will tell you about the gooey sweet bonding that happens between the karaoke and the shop talk. So the lack of face time in 2020 has been hard, but for me, the presence of social media groups, especially on Facebook (as much as I hate to admit it) has helped fill the gap. I feel like I still “see” my dear friends and have a sense of how they are and what’s going on. More than that, I crave the interaction, look for their posts, and try to be responsive. For me, these voice over groups on social media are not a distraction, they continue to give me a sense of connection when we are all forced to be distanced at the moment. This week, these connections in my Facebook voice over community genuinely helped me through an experience from a pay to play that had me feeling pretty exasperated.

The Frustrating Experience of this Week

On Thursday I got one of those messages we all love: I had been cast in a national spot. Spoiler: wait before you start celebrating for me, it does not end well. The initial offer was low and it needed negotiating, which in no way scared me off, negotiating is part of the job, right? But the good news was that they wanted me and I was available. The message came through Voice123 and the client asked me to call him right away. I called the client back immediately. I spent a long time chatting with the client. The spot was actually more regional in use but the client wanted national rights to not have to deal with his client more later. Fine. We also discussed pricing for web and social media. He was pleasant and very specific. He wanted a zoom session Friday morning. I gave him a choice of times and he said he would get back to me. I had a 5 pm zoom on Thursday and I was in a really good mood during that call. When I got off of that call, I got an email from the client. He said his client no longer had the budget and was going to use an in-house voice. They were going to use an in-house voice for a national spot? Are you kidding me? And he wasted so much of my time. I was really annoyed. I was aggravated. Frankly, I was pissed off.

I Was NOT Alone….

One of my VO besties suggested I post it on Facebook. We have a VO Red Flags group, and I also decided to post in our V123 Platinum members group. My wheels were turning and I was curious if he had interacted with anyone else. I wanted to see how others would have reacted and if this had happened to anyone else recently.

I got an immediate response in the V123 group. This guy had been making his rounds to other top voiceover talents. He had been negotiating with one male talent all week, since Monday! He had contacted other female voice actors at my level who also book a lot on that platform to negotiate with them! For some reason I have not seen my post go up in the Red Flags group yet. Sometimes that happens.

The point, though, is that I felt much better having a community to discuss this with. I was not alone in my booth, or alone in my kitchen talking it through with my husband. I was part of a pretty awesome group of talents dealing with this together. I went from feeling angry to being thankful for having such awesome people. I realized this guy was outnumbered. He had heard over and over and over that his budget was too low. We were all in sync. The reason that there are industry standard rates and that we can all work so hard to maintain them is because those of us in the industry are such a cohesive, tight knit network.

So to be clear, the response that I got on Facebook this week had both an emotional impact on my stability and also, at the same time, showed the impact of the VO bond on our business. By communicating and remaining close, we all benefit. It is so so important that we stick together!

So cheers to a better 2021, and to seeing you all in person, so that I can give you all a big hug and we can have some fun together again! I am so profoundly thankful for this community.