My recent commercial booking for JP Morgan makes for a great case study in voice over bookings. As a professional voice actor, every booking makes us happy, but when the producer emailed me about these radio spots, his explanation was interesting. I was cast directly without auditioning. He did not mention my voice. Nor did he mention my demos. In this instance, it was a matter of scheduling and availability. As I work full-time, they needed someone who could accommodate a live session at a specific time, which turned out to be 11 a.m. on a Friday morning, and he needed to confirm that I was available. The timing, in this scenario, was the most important question I was asked. The producer got back to me and confirmed that I had indeed booked two spots and it was a go. I was delighted.

I asked the producer if we would be using Source Connect or Zoom, the most common ways I connect for live sessions. Initially he gave me a phone patch dial-in and password. This would have been fine. Then, at dinnertime the night before the session, the producer said that the clients preferred Zoom and the team at Spotify sent a link. That was also fine. I recently worked with the VO Tech Guru, and he showed me how to do audio playback during zoom sessions, so I was really excited to test it out during my session.

I prepare for every single session, whether I am self-directing or in a live session. Part of my prep is administrative. I take some time to log the job in my CRM and create the invoice. I then print a large print version of the script using my preferred font. Then, prior to marking up the script, I spend a bit of time researching the brand and their other ads. Interestingly, JP Morgan and Chase are linked. As a client, when I log in for my JP morgan account I also log into my chase account. Well, at the moment, the below Chase spot is the most sought after read in a long time. Clients often request this as the benchmark for tone, style, and pacing, so I had this in mind going into my session for sure.

The Start of the Call

I think the start of a live session is really important. There happened to be a lot of people on this call. In addition to the producer, there were several people from the Spotify team and several people from the JP Morgan Team, including the scrip writer. In my mind looking back here were at least eight people on the session. It is my job to make them happy and to make them comfortable. I try to use the time at the start of the session to let them know that my feelings are not a factor, and that the only thing that would upset me would be for them to know have exactly what they need at the end of the call. I try to have friendly banter, but I want them to know and to be comfortable that I will give them whatever they need, and that it is not about me, it is about them. I think there are a few precious moments to establish this rapport and set the tone.

Working Through the Spots

With so many on the call, there can be a lot of side chats during a directed session to make sure everybody has the takes that they want. This team was fantastic. They gave very clear direction and it was easy to take their feedback and run with it. They also all remembered to mute themselves while I was recording, which makes everything seamless. In this session, I read the first script all the way through three times. They gave me feedback. I again did three takes, and then we did some variations of the lines. Then, after the line reads, we did the whole script again. It really came together nicely. It was also super exciting to use Zoom’s audio share feature to play back the audio for the clients during the session so that they could mark the takes that they liked and we could also check the timing of the spots. Then we moved on to the next script, and worked through it the same way. The second one went a little faster as I understood what they were looking for from the first spot. All in all, the group was great to work with. For me, because JP Morgan is my bank and I use the app, it was easy to see the product and be enthusiastic about it because I actually enjoy the very features I was describing.

After the session, I simply sent the drop box link to the producer. I had been deleting outtakes and pausing while we chatted during the session. As I’ve been doing this for years, I am now accustomed to marking the spots and deleting what is not needed during the session. It makes it so much easier to do it in the moment! It is a moment of great joy when I attach he link knowing that the producer now has what they want!

I am often asked whether I prefer live sessions or self directing. The answer is really that it depends. I love self directing because it gives me a chance to be creative and a freedom to interpret the texts in front of me. I can explore my imagination and see where it goes. The downside, of course, is that there is always a chance of missing the mark and not giving the client what they need. With live sessions, I love the creative collaboration. I love working with other people. When I have the opportunity to work with the people who created the product or the people who wrote the script, I get a higher level of understanding and can often bring more nuance to the read. So, the answer is still: I depends.

from ipDTL to Source Connect and Everything in Between, Laura Schreiber Talks about her preferences

So You Want to Direct Me…

The answer always is, and should always be, great! I always want to make my clients very happy, and this is just another opportunity to do so! As a full-time, professional voiceover actor, I have been set up to provide my clients with live/guided/directed sessions since I opened shop. One of my coaches used ipDTL for every session, so I felt very comfortable on that platform from the very start. I remember my first directed session like it was yesterday! It was a video game session with a German director. He wanted to use skype and their were 3 others on the other end giving me feedback. I loved working with them because I was able to give them specifically what they needed and wanted from the character that I was playing, a teenage badass called Jes, in the moment they needed it! There was no need for revisions because when the live session ended they had every line just as the wanted it. I put so much energy into each take and gave them multiple options. Having feedback as I recorded was so valuable. I was not nervous, I loved every minute. 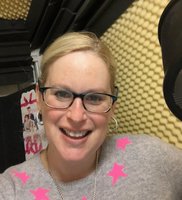 Another advantage of live sessions is that it is much easier to get to know your clients and build relationships with them when you actually work directly with their team. I learned that early on too. While you can certainly get to know clients from back and forth emails, there is nothing like actually speaking to them and working with them to make them happy. Guided sessions are fantastic and that is why I offer so many options to accommodate my clients!

ipDTL and the ISDN Bridge

I love using ipDTL. As I mentioned earlier, I started using it during my coaching many years ago and loved the clear connection and the ease of use. As I try to be a client centered service provider who makes everything as easy as possible for the folks I work with, I like that this as a service that I provide my clients free of charge for them. I simply send them a link and we are ready to go. I have never had issues with my ipDTL connection and my clients always comment on what a clear connection it is. Here is a brief video where I show how user friendly it is:

I also have a direct ISDN line with my own Los Angeles phone number through an ipDTL bridge. Several of my agents said they would not sign me without an ISDN line, so this was the easiest way to solve that challenge as Verizon stopped installing new ISDN lines in the winter of 2015. I have been pleased with this as well although I have had some hiccups with the ISDN service. The owner/founder of ipDTL looked into it and found no problems with my line, so I was left befuddled.

I do also like the ipDTL facebook group. It has helped answer a lot of questions over the years! It is free and a great asset for those of us who use ipDTL often.

To be totally transparent, I actually signed up for Source Connect in a state of total hysteria when my ISDN would not work and I needed to connect with a studio in LA for a big commercial at that moment! Thank goodness it was up and running quickly and Source Connect saved the day. I did not initially find it as user friendly as ipDTL and needed a lot of directions and help from others. Since installing Source Connect, quite a few producers have wanted to use it which is great. The connection is extremely clear and it is also easy to use, once you know what to look for!

It seems that a lot of my overseas clients still want to use Skype. Skype is fine. It is not great, it is fine. There can be a frustrating latency issue, or lag. I also find that there can be a lot of hiccups when there are software updates. It makes me nervous to use Skype in lieu of ipDTL of Source Connect, but when a client strongly prefers this I will always accommodate. Perhaps when they are comfortable with the format this drives their preference.

I have had a handful of clients demand to use the speaker phone in my booth! My mobile phone does not work in my studio as it is so sound proof it blocks the signal. I do have a land line there instead and I can use this upon request. This is the worst option as it does not go through my pre-amp and microphone, so clients cannot hear the actual audio quality and sound. There are nuances to the recording that they will totally miss. Again, if the client is most comfortable like this I will oblige.

Over the years I have had a chance to do countless guided sessions. Across genres, for all sorts of projects, I have had clients direct me for everything. While most commonly they are used for commercial sessions, I had one helluva narration session where the client was paying for an hour and she intended to use every minute of it! Boy did she have me jump through hoops, it was somewhat shocking! Whether it is for commercials, narration, IVR, video games, or promos, there is one thing in common: every session should end with a very happy client!